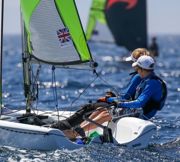 Earlier this term Ollie Baddeley (10T) and his sailing partner Sam were selected for the RYA National Junior Squad for the RS Feva double-handed dinghy, following their performance at two recent weekend selection events and their phenomenal development over the summer during their first season in double-handers.

They are one of just eight boats selected nationally for the British Sailing Squad for this class. They qualified for selection in first position nationally – a remarkable achievement given that they only started sailing together in a double-hander in April 2019, whilst still sailing in their respective single-handed classes.

Their first major regatta together in the RS Feva was in May at an incredibly windy National Championships in Abersoch, North Wales, where they held their own. In July the boys sailed at the World Championships in Follonica, Italy in July, where they finished 22nd out of 200 boats and were noticed by representatives from British Youth Sailing.

Ollie and Sam’s next goal is to win the RS Feva World Championships in 2020!

Back to Homepage
Our Virtual Open Evening is available below